Oleksiy Lyubchenko: 2020 was a year of tangible progress in efficiency of new State Tax Service of UkraineChapter: News 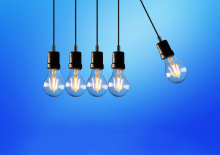 Growth of budget revenues was made possible by effective expansion of tax base through the shadow economy. This was stated by Chairman of the State Tax Service of Ukraine Oleksiy Lyubchenko in article of edition “Dzerkalo tyzhnya”.

According to him, 2020 was a year of tangible progress in efficiency of new State Tax Service of Ukraine. Given the downward dynamics of economic activity, which manifested itself in the second half of 2019, and the growth of nominal GDP by 5.4% in 2020 (fall in real output was 4%) revenues to the state and local budgets, as well as single social contribution increased by 13.5% in 2020 and the balance of revenues from value added tax increased by 36.8%. Indicative figures of tax revenues were exceeded by 49.2 billion UAH (+ 10.7%) in 2020.

With 10.3% growth of supplies of goods and services (VAT tax base) by 10.3% comparing to January – February 2020, the balance of VAT revenues increased 1.5 times (from 17.8 billion to 25.8 billion UAH). This was made possible by effective expansion of the tax base through the shadow economy.

“At the same time, the state’s counteraction against the tax abuse is still far from over. According to the State Tax Service, Ukraine’s losses from the application of tax evasion (minimization) schemes amounted to 7.7 billion USD per year” – emphasized Chairman of the State Tax Service of Ukraine Oleksiy Lyubchenko.

“For example, total income of population in 2020, excluding taxes, amounted to 3.4 trillion UAH, of which 1.9 trillion UAH is wages and other labor incomes. At the same time, revenues of trade enterprises recorded through cash registers in 2020 amounted to less than 1.3 trillion UAH. This means that only 38% of household expenditures are recorded through a fiscal check with payment of appropriate taxes and fees.” – emphasized Chairman of the STS Oleksiy Lyubchenko.