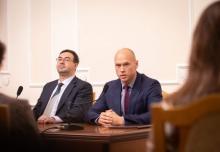 During briefing with the SSU, Deputy Chairman of the STS Yevhen Oleinikov noted that this is the first time in recent years when such large-scale joint special operation of the SSU and the STS was conducted. Due to such cooperation, it was possible not only to expose illegal activities but also to prevent further use of criminal scheme which would cost significant sums to the budget. “Increasing attention of the State Tax Service to termination of the VAT schemes has already made it possible to provide additional funds to the budget. As follows, today we already have 22 billion UAH of additional tax revenues. These are the funds that are aimed at timely financing of state’s social obligations to citizens, financing of social projects, etc. Specifically, 22 billion UAH is those funds that we will not borrow additionally, for which we will not pay interest and for which we will not have to fulfill the political conditions for borrowing. The disclosure of such schemes is the result of digitalization which is mentioned by the top political leadership of the state” – emphasized Yevhen Oleinikov.

According to him, the counteraction against schemes is not only protection of Ukrainian budget from the shortfall of funds that are in the shadows but also the protection of honest business from unfair competition.

“With current decrease in GDP, there is an increase in sales. That is, the level of shadow economy has decreased and buyers moved to the legal sector. VAT is reimbursed to enterprises in a timely manner, and, consequently, they have working capital which affects the growth of sales of enterprises in the real sector of economy. Particularly, this means that companies will not reduce, but on the contrary, will create legal jobs and working places” – stated Yevhen Oleinikov. Exposed during the joint operation conversion center was operating during 2019 – 2020. Its organizers have registered more than 400 fictitious companies. With the help of conversion center, thousands of enterprises, including state and municipal ones, evaded payment of taxes in especially large amounts.

“In the spring 2020, we began working closely with the State Tax Service to block tax minimization schemes through STS’s electronic systems. Such joint work has already allowed to return billions UAH to the budget and to make such deals impossible in the future.” – emphasized Head of Cyber Security Department of the Security Service of Ukraine Ilya Vityuk.

Officials of commercial banking institutions and former leadership of the State Tax Service were involved in organization of the criminal scheme. They enabled customers to bypass the system of automated monitoring of risk assessment. Thus, the attackers were able to exploit the vulnerabilities of information and telecommunications systems of the State Tax Service and as a result – to evade payment of taxes.

This conversion center was a part of a more global illegal mechanism for generating VAT tax credits which had previously been blocked by the SSU at the STS.

It should be reminded that with participation of the State Tax Service, the Security Service of Ukraine jointly with the Prosecutor General’s Office and the State Financial Monitoring Service conducted a special operation to expose and block illegal mechanism of VAT tax credits for business entities at the STS.

According to the investigation, this scheme caused the state losses totaling more than 2 billion UAH per month during its existence in 2019 – 2020.

STS and SSU will continue to take a comprehensive approach to the destruction of illegal VAT schemes.

Watch the video of speech of the Deputy Chairman of the STS Yevhen Oleinikov during briefing by following the link: https://tax.gov.ua/media-tsentr/videogalereya/intervyu-ta-publichni-zayavi/6759.html