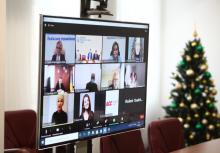 New format of work with large taxpayers became a discussion topic during online meeting of the Deputy Chairmen of the State Tax Service with representatives of the American Chamber of Commerce in Ukraine.

According to Deputy Chairman Yevhen Oleinikov, the State Tax Service of Ukraine has started its work as a single legal entity since the beginning of this year. Such institutional reform was identified by a number of Government decisions and a structural beacon of the Memorandum on Economic and Financial Policy with the IMF. As part of this reform, the format of working with large taxpayers has also changed. Five interregional STS directorates have been created to work with large taxpayers: central, eastern, western, southern and northern.

“Changing the structure and creating a network of offices to work with large taxpayers by industry eliminates duplication of functions and will improve processes of administration and taxpayers’ service. It was industry specialization by which the distribution of large taxpayers by offices was carried out” – stated Yevhen Oleinikov.

Participants of the meeting were also interested in procedure of conducting the VAT reimbursement audits.

According to Yevhen Oleinikov, the STS is determined to continue practice of prompt VAT reimbursement, qualitative preliminary risk analysis and their prevention. At the same time, considerable attention will be paid to checking the physical availability of declared goods balances during the audit regarding the VAT reimbursement.

Representatives of the American Chamber of Commerce in Ukraine noted prompt response of the STS to the taxpayers’ appeals and the appropriate level of cooperation in addressing issues relevant to ACC members.