Sorrow for the “shadow” 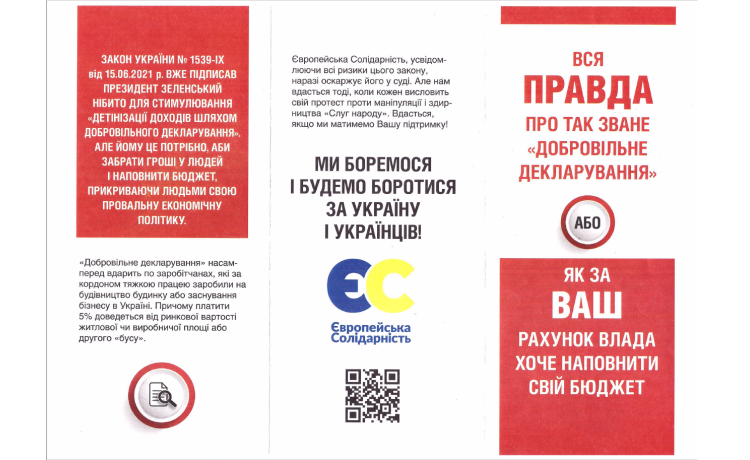 Today, on the behalf of a well-known political force that declares that it allegedly supports the European aspirations for our state, a dirty propaganda campaign was launched in the best traditions of the aggressor state aimed at thwarting initiative of the President of Ukraine to un-shadow economic relations through the one-time declaration procedure, also known as a “tax amnesty”. In the morning, near a number of metro stations in Kyiv city was organized the distribution of information booklets with frankly false information that:

the one-time declaration campaign is aimed at “filling the budget at the expense of citizens”;

As follows, on the behalf of political force known as “Yevropeyska solidarnist”, a policy of lies and manipulation is being pursued, which, according to the State Tax Service of Ukraine, aims to prevent real positive changes in the state, discredit already achieved results and imitate the “decisive protection” of citizens from the non-existent threat.

In this regard, the State Tax Service considers necessary to remind:

1.The one-time voluntary declaration is aimed EXCLUSIVELY at giving those who honestly earned their income but for any reason did not pay taxes from it an ability to turn this page and never again feel any worries about the possibility of claims regarding violation of tax laws.

Regular exceeding of the expected level of budget revenues by actual revenues also demonstrates that the effective tax administration provided today, including by the State Tax Service, makes any tax manipulations unnecessary.

2. Citizen can live in a palace, fly on own plane and keep billions on accounts or under a mattress, but if taxes have already been paid from income that allowed such citizen to form these assets, he / she does NOT need to submit the declaration. Reminder! Citizen can get information about income through the taxpayer’s E-cabinet or in the STS’s service centers.

And only if assets accumulated due to the hidden income from taxation EXCEED these limits – then citizen SHOULD CONSIDER whether to submit the one-time declaration to unshadow income and assets as those from which taxes have been paid. However, this decision is still purely VOLUNTARY and citizen should make it exclusively personally.

At the same time, the State Tax Service unequivocally connects the beginning of campaign of lies and manipulations with the indisputable fact that initial expectations of some politicians and their sponsors regarding the failure of one-time declaration did not come true. During the first month of the one-time voluntary declaration, citizens who used this procedure have already paid more than one and a half million UAH to the budget and this figure will only increase. But the main deal is not even in this indicator.

Most importantly, with each submitted declaration, the perpetrators of this dirt and lie campaign will find it increasingly difficult to hide their unwillingness to honestly fulfill their obligations to society by paying taxes under the hypocritical pretext of “inability to pay taxes honestly in Ukraine”. That’s what, to the deep STS’s conviction, scares them the most. And we are convinced that the one-time declaration campaign will be successful and fears of those who try to counteract it will come true.

P.s. STS  sincerely hopes that the political party “Yevropeyska solidarnist” has nothing to do with the spread of this nonsense and calls on the EU to make this public as soon as possible and to support the one-time voluntary declaration campaign, preferably by its own example.