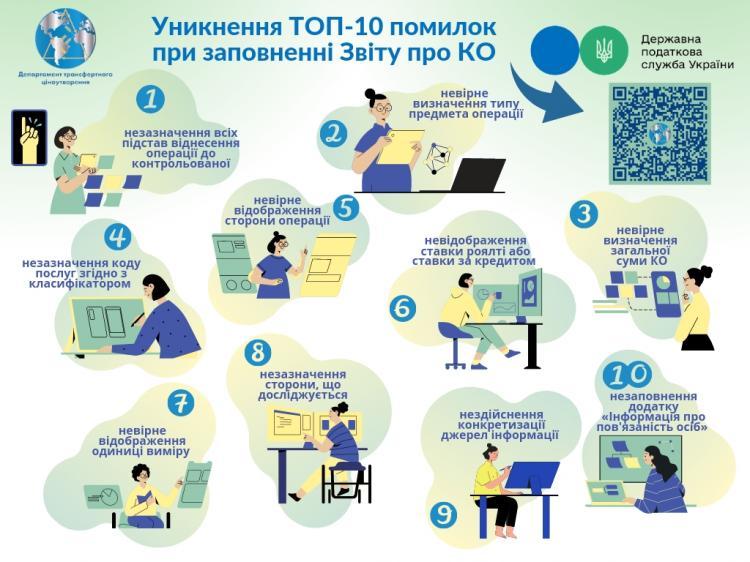 Recently, the State Tax Service of Ukraine clarified basic rules for filling in and controlling completeness of submission of Report on controlled operations (hereinafter – Report).

And today, basing on the annual monitoring of submitted Reports, the State Tax Service summarized the most common mistakes made by taxpayers when filling in the Report.

The TOP 10 included the following mistakes:

- failure to specify all grounds for classifying operation as controlled;

- incorrect determination of the total amount of controlled operation;

- failure to specify service code according to the classifier;

- incorrect reflection of party of the operation;

- failure to specify the party under investigation;

- failure to fill in an application "Information on the relationship of persons".

In order to simplify perception of information presented by the State Tax Service, an infographic has been developed, which contains both examples of the most common mistakes made by taxpayers, who fill in the Report, as well as specific advice on how to correct them (avoid them).

It is recommend to process the specified information in order to avoid technical mistakes when submitting the Report. It is the independent detection and timely correction of mistakes that will protect taxpayers from unnecessary questions from the controlling body and in the future – from application of appropriate fines (if there are grounds).

Print version
Previous Specialists of the State Tax Service discoursed about the transfer pricing reporting peculiarities
Next   Important information for taxpayers from October 1, 2022