Oleksiy Lyubchenko: For many people patriotism ends as soon as taxes have to be paid 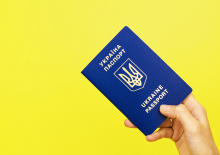 Measures and liability for the non-payment of taxes should be strengthened, particularly criminal prosecution. This idea was stated by Chairman of the STS Oleksiy Lyubchenko in an interview with the online publication “Gordon”.

“Organization of tax evasion schemes has become a part of Ukrainian business culture. Scary thing is that organizers of very aggressive tax evasion schemes do not consider themselves as criminals. Well, in general. And this culture (because of which people die without receiving timely help in hospitals) is a public safety. This is exactly an agreement that is under a threat in the state. Strictly speaking, degradation occurs because criminals do not understand degree of their guilt” – assured Oleksiy Lyubchenko.

According to Chairman of the STS, at present the issue of personal data disclosure is important in Ukraine. After all, currently everyone is constantly talking patriotically about the budget but for many people patriotism ends as soon as they have to pay taxes.

“As Chairman of the State Tax Service, I don’t understand how 1400 cars were bought being much more expensive than 100 thousand USD per car over the last five years. People spent more than 4 billion UAH. I checked their income during seven years – it would be enough only for the wheels for these cars. There are Bentley, Mercedes and McLaren ... They would not have enough money for wheels ... That is it on an eye only there are unpaid billions of taxes. Is this a question for the Tax Service? Probably, to the Tax Service too. But how could they buy car in a salon, if only 50 thousand in cash can be paid? Not millions, tens of millions. That is how?! System of financial monitoring, system of responsibility – there is a whole tangle of contradictions to which we must respond. That is, there must be a comprehensive work.” – emphasized Oleksiy Lyubchenko.

Chairman of the STS considers that as of today in Ukraine the time has come when it is necessary to carry out economically competent, demographically modern census of population and also to introduce zero declaration. According to him, now this question is number one from the President. There are already ongoing debates in profile committees regarding the form in which this should be conducted, there are several models.