Oleksiy Lyubchenko: We follow recommendations of international experts regarding reformation of the STS 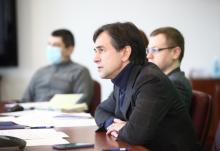 Taxation processes and reformation state of the State Tax Service of Ukraine were discussed in a framework of the EU-Ukraine Strategic Dialogue on Public Financial Management System Reform.

Online meeting was attended by Minister of Finance of Ukraine Sergii Marchenko, First Deputy Minister of Finance of Ukraine Denys Uliutin, Chairman of the State Tax Service Oleksiy Lyubchenko, Head of the Support Group of Ukraine, Deputy Director General of DG NEAR of the European Commission Katarina Maternova, Head of Cooperation Programs of the EU Delegation to Ukraine Frederic Koene, representatives of the International Monetary Fund, Organization for Economic Co-operation and Development, the EU Advisory Mission (EUAM), representatives of the EU4PFM project and others.

Participants discussed functioning of the STS as a single legal entity. STS is working in a new status starting from 01.01.2021 having fulfilled one of priority tasks set for the STS by a number of Government decisions and a structural beacon of the Memorandum on Economic and Financial Policy with the IMF.

The EU representatives noted a coherence of actions made by the STS in reformation, compliance with deadlines and effectiveness of personnel policy. Progress on simplification of taxation processes was also positively noted.

Attention was also focused on measures of the STS aimed at combating tax evasion, specifically termination of schemes for the formation of fictitious VAT tax credit.

According to Oleksiy Lyubchenko, with a decrease in the amount of nominal gross domestic product, the VAT revenues have increased by a third.

“Such results are logical consequence of electronic VAT administration system and tax risk monitoring system during the registration of tax invoices. This has put an end to illegal schemes used by dishonest taxpayers to minimize their tax liabilities.” – stated Oleksiy Lyubchenko.

Chairman of the STS thanked the EU experts for their support and advisory assistance and emphasized importance of recommendations of international experts on the implementation of innovations and initiatives of Ukrainian tax authorities for their effective implementation and enforcement.