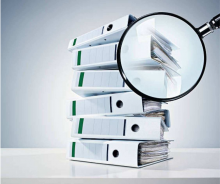 Ignoring legal requirements of the Tax service by officials of one construction company to provide primary documents confirming its business activities during the documentary audit, was one of the reasons for additional accrual of more than 30 million UAH of taxes and penalties.

For audit, the company did not provide any documentary evidence confirming costs and use purchased goods, works and services totaling almost 100 million UAH, for which the taxpayer formed a tax credit.

In addition, documents were not provided during the objection procedure of the audit report and stage of administrative appeal at the level of the State Tax Service. At the same time, heads of the construction company resorted to court appeals against actions of tax authorities. However, the court found tax authorities right.

Resolving the dispute, judges concluded that documents provided by the plaintiff during proceedings, but not provided to tax authorities, could not be taken into account by the court as admissible evidence in the case, as they were not the basis of the disputed tax notification – decision.